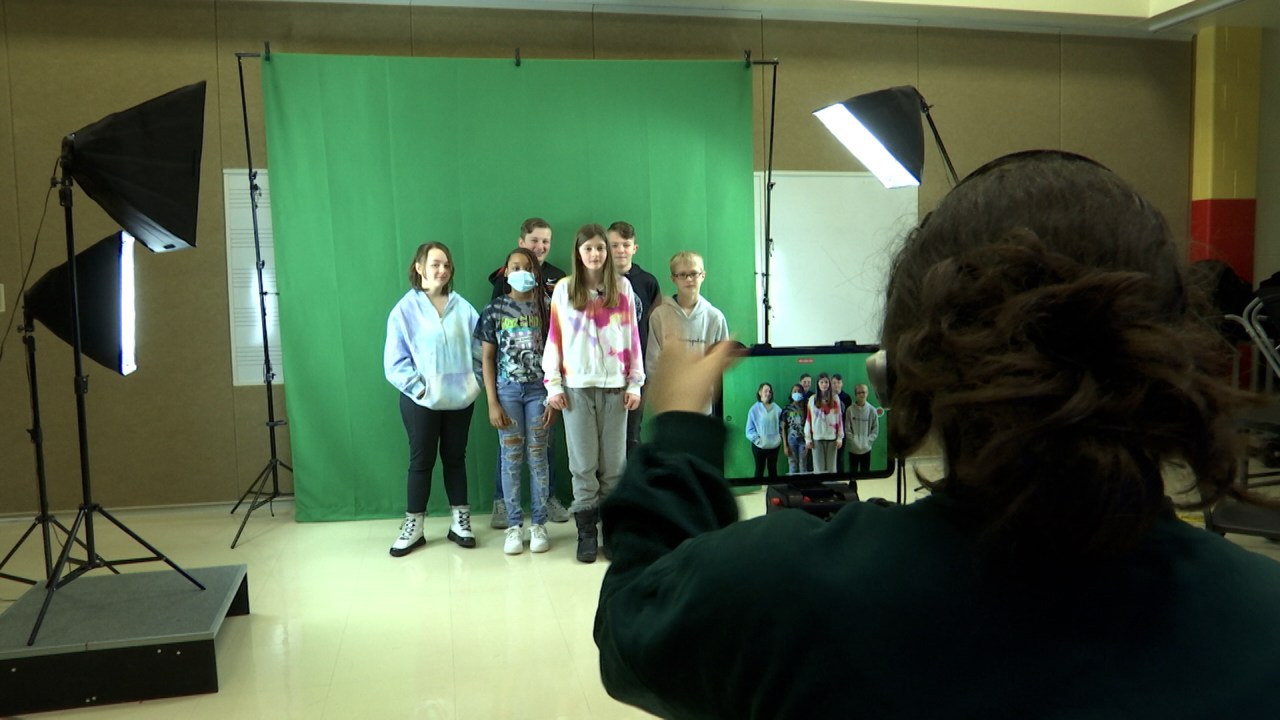 “I’m pretty much the leader with my friend Nolan. We do things like what’s happened in history, national days, what day it is,” Chase Wampler said.

The “Warrior Crew” broadcasts daily morning announcements for the school on the “Warrior News Network”.

Everything is student-driven. Sean Turner, an intervention specialist, supervises the students.

“In fact, we pre-record the day before, so that the children can invent their own scenario. They will make the weather. They will make the news. They will do fun facts. They will make anecdotes, jokes. They have themes of the day,” Turner said. “It was a great learning experience for all of us. Not only am I learning, I’m doing a lot of research, trying to figure out different tricks and techniques and things like that, but kids are doing the same thing. They really hang out here. They come up with ideas. They teach me different things about how to edit and use gear.

Students must apply to be part of the Warrior Crew.

“They have to be interviewed to be part of this process. So at the end of their fifth year, they have to submit and apply, then we interview them and then they have to do a test video. And then we select from there,” Turner said.

Fewer than a dozen students make up the Warrior Crew.

“It tells you, like, what’s happening this week, next week,” said Tiffany Pham, who is one of the on-camera talents broadcasting events.

Each has a different role.

Kendall Marshall is one of the reporters.

“I love being on camera,” Kendall said.

While some are in front of the camera, others are behind.

“I take care of all the equipment, really. Mr. Turner says I must be very responsible and gentle. And that makes sense because it’s expensive equipment,” said Asmaa Abdellatif, who manages the camera.

“I got involved because I love editing and I love computers,” said Carson McFadden.

The Warrior Crew is in its second year. They started streaming on Google Meet, then switched to an iPhone, and now they have their own studio setup with lights and a green screen.

They acquired the equipment thanks to some grants.

Pre-recording the night before, students have daily prep work to do.

“I like writing the scripts, and I really like doing the fun fact of the day and the trivial question because that’s the most fun part of the news for me,” Nolan Fox said. “We always have to write the script in the morning. We arrive around 9am and have a few websites where we can get our information. And then when we’re done with the scripts, we go back to class, and we come back down here at 10:30 and record.

The students faced challenges at times, including making the announcements live in real time.

“I just like living. I feel like it’s more fun because we’re trying harder. We want to do better,” Carson said. “With doing it on tape, we have more time for ourselves. prepare in between. If there’s a mess on one of the slides, we can go and fix it. But when we’re doing it live, we just go through it, and if there’s a problem, we try to to repair it.

They also learned the importance of editing.

“I sort of help with a lot of things, but the main thing would definitely be editing and supporting everything else, making sure everything is fine,” Zarina Shakhmanova said. “There’s chroma keying. You have to make sure that everything is well cropped – the backgrounds. What backgrounds seem choppy? Which backgrounds look correct? »

In addition to learning the ropes and trades of the broadcasting industry, they also learn skills to help them in life.

“It gives me more confidence because at first I was afraid to record, and now I’m not,” said Ashlyn O’Connor, who streams student, staff and celebrity birthdays for the ‘school.

“Being on camera has definitely helped me be more present than I was before,” said Brooklyn McClure, who streams what’s on the lunch menu. “I think it really helped me get over a lot of the anxiety I have in front of the camera, especially with all the kids always saying hello to me. That’s a lot to talk about.

Every day in the spotlight, they are already making a name for themselves.

“There are already a lot of kindergarteners looking up to me,” Kendall said. “They’ll be like there’s the morning news girl. They will start waving at me and saying hello.