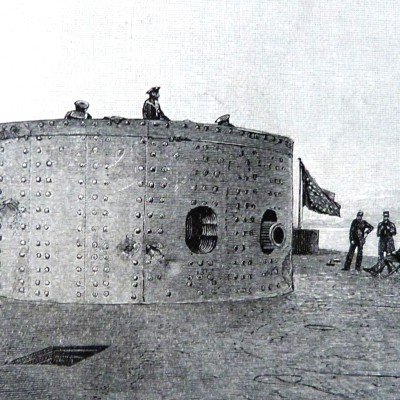 Growing up in Hawaii, Tane Casserly’s school spent about an afternoon covering the Civil War.

One thing stuck in his memory from that brief history lesson: an illustration of the Union’s USS Monitor locked in battle with the Confederacy’s CSS Virginia. The battleship Monitor fought the Virginia to a draw at the Battle of Hampton Roads in 1862, but then sank in a storm off the coast of North Carolina. Now, 160 years later, Casserly is a marine archaeologist for the National Oceanic and Atmospheric Administration and leads a federal mission to explore and livestream wreckage to the ocean floor.

This office shares costs with the National Centers for Coastal Ocean Science and collaborates with the State of North Carolina and the Global Foundation for Ocean Exploration. The expedition will run from May 15 to May 25 and will include daily live streams as Casserly’s team sends remote-controlled vehicles to the monitor and other wrecks in the area.

The Valor of the Atlantic voyage will begin and end with the mission and provide archaeological data to inform historians, as well as marine life data that will enable NOAA and other stakeholders to better protect the area. The wrecks have become like a reef, a magnet for fish and other marine life that fuels the local fishing industry.

“Ecologically, it’s incredibly important because of the habitat,” Casserly said. government executive as he sailed from Charleston, South Carolina aboard the NOAA vessel Nancy Foster. “Economically, it’s extremely important, because of the funds and the tourism it brings to coastal Carolina. And then historically, of course, it’s extremely important to document our past and work with our federal partners to help them. to also manage their sites.

The Monitor’s location remained unknown for more than 100 years, until a research team, with the help of the National Science Foundation, located it in 1973. It then became the first national marine sanctuary, NOAA leading efforts to protect and explore the site. It has not launched a thorough investigation of the wreckage since 2002 when, in partnership with the Navy, it salvaged the ship’s turret. Nicole LeBoeuf, director of NOAA’s National Ocean Service, said the new technologies that will become available will provide unprecedented access to the Mission and other wrecks for both researchers and the public.

Casserly, a 22-year-old NOAA veteran who has already dived into the mission and touched it, said he was very excited about the live stream and the “360° video” that will allow audiences to explore the wreck with virtual reality glasses. Audiences, he predicted, will be wowed by the “oases of life” and “huge expanses of color.”

“You have the historical aspects of these gigantic shipwrecks on the bottom and the huge fish and predators that inhabit this house, so when you walk in it’s almost like an African safari,” Casserly said. “It’s just everywhere you look, marvel and marvel.”

The team will send two remote-controlled vehicles, one with the cameras and one that will provide a searchlight. Live streams will sometimes be narrated by local dive shops or restaurant owners, so audiences can hear area residents react to what they’re seeing in real time.

NOAA will take the lead in analyzing the data to better understand how shipwrecks evolve into major sustainers of marine life, while the North Carolina Office of State Archeology will take the lead in developing historical information . The Global Foundation for Ocean Exploration is contributing much of the technology that will enable live streams, which Casserly says will allow the public to see things for the first time at the same time scientists are also making these discoveries. There are a dozen engineers and archaeologists aboard the Nancy Foster and about 20 officers and crew, all of whom will live on the ship for about two weeks.

Many of the wrecked ships the NOAA team will visit have met their fate due to hurricanes and other storms. Some were intentionally shot down by a fledgling Air Force attempting a proof of concept that aircraft could sink a battleship. Others were sunk by German submarines in World War II.

“Seeing this story of naval battlefields on the seabed just off the east coast of the United States reminds us how close war has come to the American coast,” Casserly said. “When you immerse yourself in that direct connection to that part of history, it’s amazing.”

Casserly, who often dives with 180 pounds of gear and goes to depths of 260 feet — well beyond the scope of recreational diving — has helped document many wrecks. His current mission will see him stay mostly above water thanks to an unusual setup he’s not used to.

“It’s hard for me to describe what it looks like here,” Casserly said, comparing the Nancy Foster’s installation inside a NASA space center during a launch. “That’s pretty cool, I’m not going to lie. I’m very lucky.”

You can watch the livestream here from May 15.