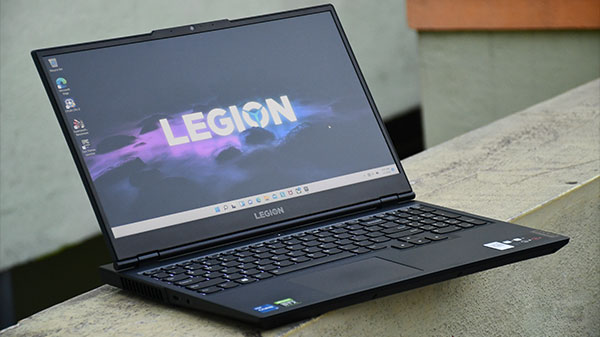 Lenovo Legion 5i Gen 6 (2021) Review: Lots of Power for Mainstream Gaming and Streaming

The Legion series of gaming laptops have their own design, which sets them apart from other gaming laptops. From the bold Legion logo to the subtle Lenovo embossing on the back, one can easily see that it is good from a gaming laptop from Lenovo.

Like most gaming laptops, the Lenovo Legion 5i Gen 6 (2021) has a wide range of I / O, and most of them are located on the back of the laptop, this which is again a very typical feature of a Legion laptop. Personally, I like this design because it helps hide most cables and gives the table a clutter-free look.

The laptop has three USB 3.2 Gen 1 ports and an always-on USB 3.2 Gen 1 port, which can be used to charge smartphones and other accessories. The device also has a Thunderbolt 4 port with DisplayPort 1.4 output support, an HDMI 2.0 port, an RJ45 Ethernet port and a 3.5mm audio port. The laptop lacks an SD card slot, which is disappointing, especially for content creators.

The Lenovo Legion 5i Gen 6 (2021) comes with a 15.6-inch IPS LCD display with a refresh rate of 120Hz. The screen has a peak brightness level of 250 nits, which is the downside of this panel. The higher refresh rate makes it a good panel for gaming. However, not so much for content consumption.

I felt the panel was not bright enough, especially in a well-lit room. Even watching movies and web series I felt the contrast ratio was not very good which is again a low light issue. I also noticed a slight bleeding when a scene from a game or movie turns the entire screen into a single solid color like black or white.

Note that most people may not notice any of these issues. As I had just used a high-end laptop, the Asus ROG Zephyrus S17, I felt Lenovo had made some compromises when it came to the display. Considering this is a gaming laptop, it’s really good that the panel supports a maximum refresh rate of 120Hz, although the GeForce RTX 3050 might not be able to drive. stable 120 fps gaming.

The Lenovo Legion 5i Gen 6 (2021) has a full-size keyboard with a dedicated numeric keypad. The keyboard offers backlighting (two levels). However, this is only a monochrome (white) backlight. Since the laptop costs well over a lakh, the company should have offered at least three or four zoned RGB lights.

As for the keys themselves, they offer a lot of key travel and I didn’t notice any hum when typing or playing. The trackpad is up to the competition, supports various gesture controls and is quite fluid to use.

The Lenovo Legion 5i Gen 6 (2021) has above-average stereo speakers. The dual 2W speakers supporting Nahimic Audio are loud enough and the sound can easily fill a room with ease. I also liked the clarity of the sound, even at 100 percent volume, although I felt the speaker setup lacked powerful bass.

There is a 720 webcam on the top bezel, which is again similar to most laptops. The camera does a great job, and the Lenovo Legion 5i Gen 6 (2021) can be used for normal video conferencing and game streaming, given the room is well lit. Hopefully Lenovo will include at least a 1080p web camera in the future version of the Legion 5i.

The Lenovo Legion 5i Gen 6 (2021) is powered by the Intel Core i7-11800H processor, which is a high-end H-series mobile processor from Intel with eight cores and sixteen threads. The processor has a maximum clock speed of 4.6 GHz and a TDP of (max) 45 W.

However, it only packs 4GB of video memory which could be a limiting factor when playing some games that require higher memory bandwidth. The RTX 3050 laptop has a 95W TGP and the laptop comes with a 230W AC adapter, which is again enough to power the Lenovo Legion 5i Gen 6 (2021).

The NVIDIA GeForce RTX 3050 laptop with 4GB of GDDR6 video memory is currently the entry-level offering of the RTX GPU series. On the Overlay benchmark, the laptop scored the following numbers. With average graphics settings of 1080p, the laptop had an average FPS of 70.31, while the frame rate dropped to 51.67 fps when the graphics quality was high.

Likewise, with extreme graphics settings of 1080p at 21.67 fps, when we tried to run the benchmark at 4K resolution, we received a warning that the VRAM limit was reached. When we ran the benchmark, we got an average FPS of 30.75 and the graphics were set to optimized quality.

These numbers are a clear indication that the Lenovo Legion 5i Gen 6 (2021) can easily handle most games at 1080p resolution. However, you may need to lower the graphics quality to get higher FPS.

Verdict: worth the price