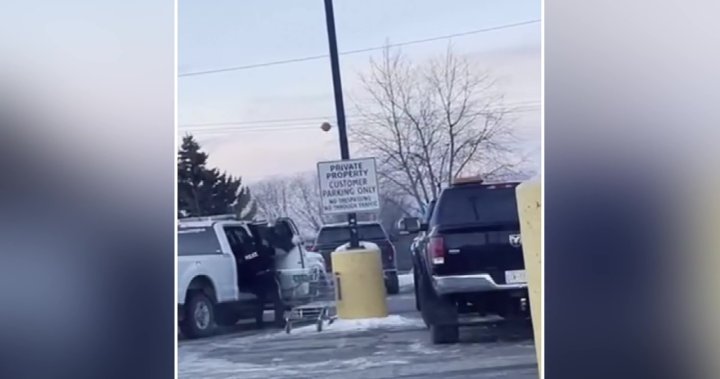 A cellphone video of a physical interaction between an Alberta RCMP officer and a young Indigenous man was shared hundreds of times on social media accounts on Tuesday.

The incident itself happened in Rocky Mountain House, Alberta on Monday night.

“(RCMP officers) actually received multiple calls for service for an intoxicated individual running in and out of businesses, in traffic, yelling, yelling and hitting vehicles,” the Cpl said. said Troy Savinkoff.

Savinkoff is part of the RCMP Media Relations team.

He confirmed that the videos shared online relate to this response.

READ MORE: ‘I was pleading for air’: Albertan on trial for assault in Winnipeg accuses RCMP of excessive force

The witness who captured the videos asked not to be identified. She too is aboriginal and is worried about facing discrimination.

She told Global News she first saw the man who appears in the video when she arrived at a Sobeys store for groceries.

“We walked past a young man who seemed under the influence,” she explained.

“He was walking through the streets and down the highway screaming.”

When she finished shopping and returned to the parking lot, she said she saw a police officer approach the man with his gun drawn. That’s when she started recording.

The video shows a man walking around, then an officer pointing a gun at him. There is no sound.

The man then lies down on the ground and puts his hands behind his back before being handcuffed by the policeman.

“Not once did he resist arrest at any time, from what we could see,” the witness said.

The woman said she thought the officer was unnecessarily aggressive.

“(He) just ripped him off the ground and started pushing him towards the vehicle, not letting him put his feet on the ground or anything,” she recalled.

She then stopped filming, assuming the ordeal was over.

But as she was about to leave, she said she saw the officer shove the young man roughly against the truck, pat him down and pull down his pants before opening the door.

It shows the man standing with his pants around his ankles before the officer grabs him by the legs and throws him into the back of the truck headfirst.

“He flipped it upside down,” the witness said.

“It made me angry. It upset me. It was disgusting that someone treated a human being with such disrespect.

RCMP told Global News the man was not injured and no charges have been laid in connection with the incident.

Savinkoff said police are looking into what happened.

“Currently, this incident is still being reviewed at the detachment level, to see if we are proactively considering a use of force investigation,” he said.

Temitope Oriola is a professor of criminology at the University of Alberta.

He watched the videos and said he was deeply disappointed with the officer’s conduct.

“Such officers give law enforcement a bad name,” he said.

“Therefore, I would expect a full and thorough review of these videos and this officer’s conduct.”

He said he thought the arrested man just needed help, and added that he was shuddering to think of what would have happened if he had fought.

“In fact, this person never resisted, fell flat on the ground with her arms towards her back – and yet she was still moved and thrown into the truck as if she were not even human” , Oriola said.

He said the community has worked hard to establish a positive relationship with the RCMP, but this incident concerns him.

The witness said she hoped her video would help spark change.

“I would like to see repercussions for the officer, because as a human being no one deserves to be treated this way.”