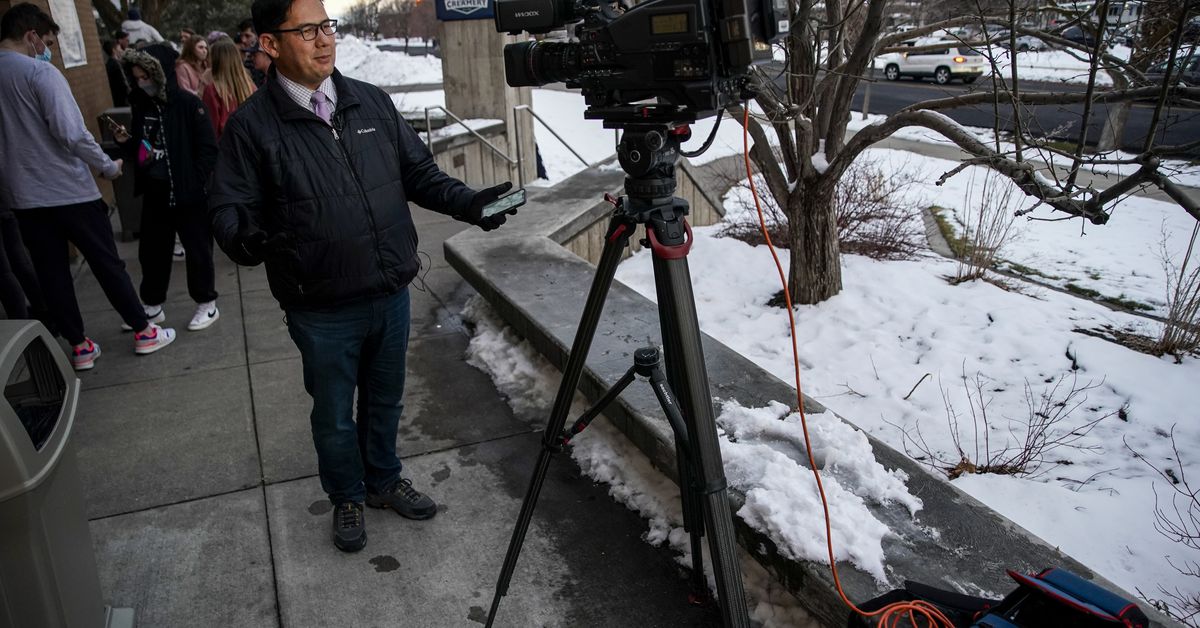 Tori Yorgey has done what no local TV reporter wants to do – her live TV shot has gone viral.

In a video that has been viewed more than a million times on YouTube and garnered thousands of shares on Twitter, the 25-year-old multimedia reporter from WSAZ-TV in Charleston, West Virginia, was hit from behind by a passing car Wednesday night as he reported on a broken water main.

Yorgey barely skipped a beat, immediately telling presenter Tim Irr “it’s live TV for you, but it’s fine”, while reassuring viewers, and what appears to be the driver of the car, that she was not injured.

“I just got hit by a car, but I’m fine,” she said before adjusting the camera that rolled over, then moving to a safer location.

While his ability to bounce back with composure and humor was praised – including by the hosts of TODAY – the viral moment sparked a wider conversation about journalist safety, in particular the use of “groups individuals,” where multimedia journalists are sent out into the field to cover stories on their own, sometimes live. The video and the subsequent media coverage angered some television journalists who found themselves in similar and dangerous situations.

“It’s like seeing someone fall off a cliff and bounce back. It happens from time to time. That doesn’t mean it’s a good idea to fall off a cliff,” said Scott Libin, senior fellow at the University of Minnesota’s Hubbard School of Journalism and Mass Communications.

Libin, who also worked as a television reporter before becoming news director for several Minnesota stations, showed the video to his students Friday morning.

“When you walk into these interviews, you have to ask questions about how these homework assignments are done,” he told the class. “And ask, ‘Do you have the resources available and are you willing to spend the money to keep me safe.'”

Sending multimedia journalists alone into the field is not uncommon. Stations used to transmit live signals via microwave or satellite, which requires a second pair of hands. But with the advent of portable transmission packs, journalists can report live without a photographer.

That doesn’t mean TV stations are still sending media reporters into the field alone – some outlets have safety policies in place to avoid situations similar to what happened to Yorgey.

But many small-market stations rely on “one-man orchestras” for their live shots. Take Montana’s KTBM, for example, where Lauren Steinbrecher once worked as a reporter.

“It was very simple,” said Steinbrecher, who now works as a multimedia journalist for Deseret News’ partner company KSL-TV. “There were only three journalists on the team, in total, and we split all the work – days, nights and weekends.”

When Steinbrecher worked in Montana, live views were as common as they are today. “I think having access to be able to live like that changed what MMJs were doing and potentially put them in more dangerous situations,” she said.

Bad weather is often the cause of these dangerous situations – Exhibit A is Yorgey, who was reporting live in the dark during a freeze-thaw event.

Just a few weeks ago, Mike Anderson, also a multimedia journalist at KSL-TV, was looking for a place to shoot alone in Sardine Canyon in northern Utah. A 22-year television veteran, Anderson drove down the road in search of a safe place. When he couldn’t find any, he called the producer, told them it wasn’t possible, and filmed his segment from a parking lot in town.

Had he been early in his career, he might have taken the risk of reporting from the side of a slippery road, as many young reporters often do, he said. Writing culture also plays a role.

“I have no idea what his newsroom is like,” Anderson said of Yorgey. “I’ve worked in other newsrooms where you’re a little more scared to get motivated. And hopefully she’s had more caring support like I think we have at KSL.

In recent interviews, Yorgey has repeatedly said that she never felt unsafe. When she feels unsafe, her boss is the first to tell her to leave, she told TODAY.

But she prefaced the statement by saying an industry-wide conversation about the safety of solo reporting is “a conversation worth having.”

Reporters who spoke to the Deseret News on Friday said the video highlights the unpredictability of live television and how having a second eye can often prevent a situation from becoming dangerous. This goes for all situations, whether it’s a freak weather-related accident like what happened in Yorgey, or incidents where people are actively targeting journalists.

“That’s one thing people don’t realize, we have no idea what might happen when we’re there and when we’re going to shoot our video, especially if there’s no one watching your backs,” said Jordan Verdadeiro. , multimedia journalist and ABC4 bureau chief in southern Utah.

Verdadeiro is almost always a one-woman show. “I only do solo live shots, being the only reporter in southern Utah,” she said on Friday.

The morning she spoke with the Deseret News, she was reporting from the side of old Highway 91 in Hurricane, shooting alone near the busy road as passers-by slowed down and tried to distract her. One of them shouted “let’s go Brandon”, a codified and anti-Joe Biden phrase.

For female journalists, the dangers of isolated reporting are sometimes high. Most reports suggest women in the industry are already subject to more harassment online, and reporters tell the Deseret News the trend is extending to in-person situations.

Take the example of the viral video by Brianna Hamblin, a local reporter from Rochester, New York. Hamblin was moments away from going live when a man approached her saying “you look beautiful as hell”.

“I never really had a problem when I was with one of the male photographers or videographers. But whenever I’m alone, all of a sudden I’m that much more accessible,” Verdadeiro said. .

Of course, having a second person on hand does not guarantee that a reporter will be safe in the field. The 2015 deaths of television journalist Alison Parker and photographer Adam Ward, who were shot live on television while reporting for WDBJ7 at a shopping mall in Moneta, Va., remain a painful memory for journalists across the country. Both men were shot by a disgruntled former colleague, who then killed himself as police pursued him.

Verdadeiro does not blame the station where Yorgey works. “To be honest, I think everyone at that time did what they could.” But given the scope of the video, she hopes to see a change in how directors and news producers approach current affairs.

“I love being able to do my own stuff. I love going out and shooting my own video. I love getting my own interviews. I love writing my own scripts. I love editing myself,” he said. she said, “…But what I would really like to see, in any newsroom, is just more communication.”

As for Yorgey, she told reporters she was leaving for a new job in Pittsburgh. She still seems in a good mood, despite being hit by a car. Her boss took her to the hospital after the accident – in an interview she said there was “a bit of pain, but everything is fine”.

NO REAL NEWS: A look at what didn’t happen this week