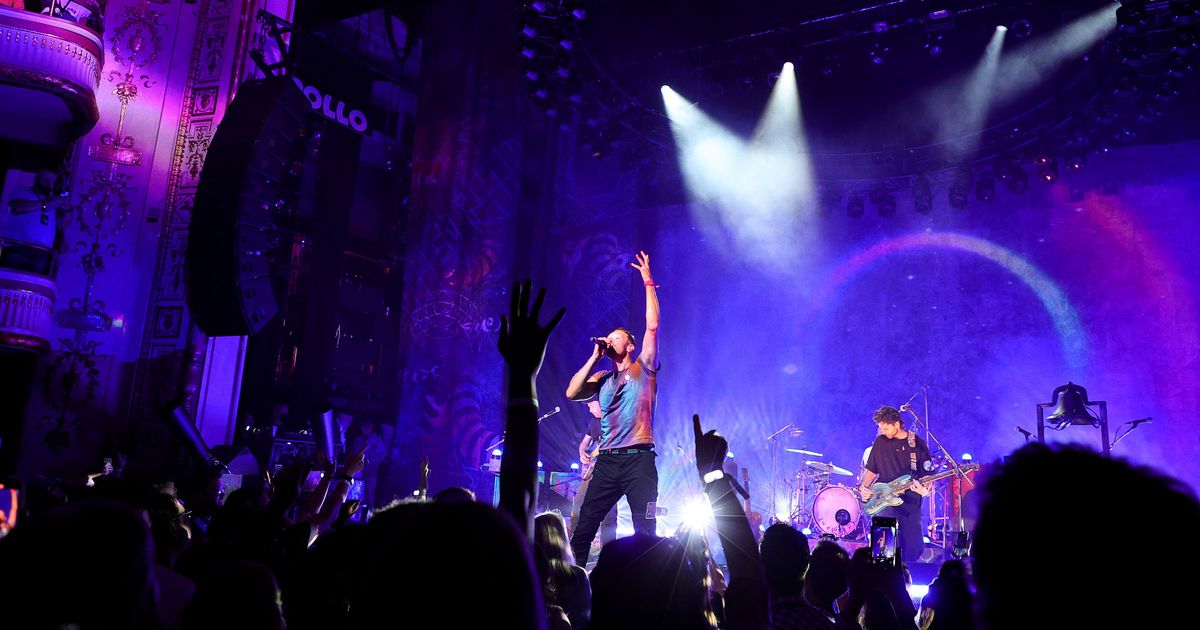 Chris Martin is the perfect vessel for songs like “Clocks” that appeal to you as long as you allow yourself to surrender to the sentimental sincerity of it all.
Photo: Theo Wargo / Getty Images for SiriusXM

New York is buzzing with music this week as the Governor’s Ball and Global Citizen festivals run concurrently and the bands perform warm-up and breakaway concerts. Wednesday’s triumphant Fugees reunion show, where tri-state legends belatedly celebrated the 25th anniversary of their 1996 full-length bombshell The score alongside a group of horns and backing vocals at Pier 17, was recorded for the Saturday show Global Citizen. Last night, Coldplay, also in town for Global Citizen, performed a rare concert at the hallowed Apollo Theater in Harlem, a far cry from the 100,000-seat stadiums the British quartet visited in 2016 and 2017, touring behind 2015. A head full of dreams. There hasn’t been a full-fledged Coldplay tour since then; the band played a handful of dates around the hectic but rewarding double album of 2019 Daily life but neglected to trace the typical itinerary of live shows in the interest of finding a more ethical and environmentally friendly approach to the tour. (â€œWe’re taking time over the next two years to figure out how our tour can not only be sustainable, but how it can be actively beneficial,â€ singer Chris Martin told BBC News ahead of the release of the latest album.) was a premonitory move, putting the public good ahead of the maddening euphoria of a shared concert experience. Since then, we’ve all had to take a break and think about ways to make live shows safer and smoother, being mired in a long global pandemic that has turned closed, overcrowded rooms into breeding grounds for deadly and contagious diseases. .

This year, as Coldplay reunites again to promote October Music of the Spheres, where Swedish pop hits Max Martin and Oscar Holter push the bubbly EDM aesthetic that fueled the 2011s Mylo xyloto again in the foreground – we got a glimpse of a band rethinking their show in real time. During BBC Radio 1’s Big Weekend in May, the group put on a jaw-dropping light show at Whitby Abbey, a medieval monastery, and revealed an impressive fireworks display at Worthy Farm in Somerset, the site, in time normal, from the Glastonbury Festival. Shorter shows over the summer at City Winery and the iHeartRadio Music Festival brought audiences back and unveiled a new ensemble that attempts to balance the Chris Martin era as one of our best piano ballads- pop with his favorite Day-Glo and dance tunes later in the 2010s. At the Apollo, the band juggled hits from both ends of their creative spectrum, with songs from the new album filling the gap. ‘difference. Not quite a festival setting and not quite a radio promo (although the show was aired by Sirius XM and Pandora as part of their Small Stage series), the performance was as loose and intimate as one. arena juggernaut.

There haven’t been many opportunities to see how the new songs coexist with the older ones or to create a setlist that covers the many moods in this band’s catalog. In one particularly revealing segment, Martin stumbled a bit trying to break out of the snaking, secular recklessness of new rocker “People of the Pride” into the jolly, jangly funk of A head full of dreams‘s “Adventure of a Lifetime” and thanked guitarist Jonny Buckland for missing the opening riff of that last song to give the frontman a second to breathe. Later, when the 84-year-old writer and teacher Coleman Barks was invited to read excerpts from the Persian poet Rumi (as he did on “Kaleidoscope” by Head full of dreams), he announced that he had missed the rehearsal and appeared to receive stage instructions in a low voice from the singer.

Coldplay classics are comfortable like a pair of sweatpants or favorite indoor shoes, loving and unchanging. “Fix You” hits hard like a singalong in a losing spell. While A rush of blood to the head‘s “The Scientist,” the couples in the crowd stood firm. A solo acoustic interpretation of “Yellow” from the 2000s Skydiving offered a reminder of where this group came from; run through SpheresThe sleek and funky BTS team of “My Universe” gave insight into their direction. During â€œViva La Vida,â€ Martin praised the hall’s history with an awkward part of â€œI Feel Goodâ€ by James Brown; Mylo“Paradise” ended with lyrics from Ginuwine’s “Pony”. Singing alongside R&B King duo Amber and Paris Strother on the Spheres highlighting “Human Heart”, Martin revisits the taste of gospel revealed in Daily life‘s “Broken”.

This group is slippery and capable, both an airtight rock unit and a restless pop group. The singer has a special, delicious and self-effacing energy that softened the twists and turns of the night. Chris Martin’s stage presence sits somewhere between a spirited high school music teacher and an aerobics teacher; her fashion sense is psychedelic in the tie-dye athleisure sense. Both buff and a little gangly, playful until he rips the pounding heart out of your chest, the lead singer of Coldplay is the perfect vessel for songs like “Clocks” that appeal to you as long as you allow yourself to. surrender to the sentimental sincerity of it all. He cuts it off with humor. After “My Universe”, Martin announced that there would be two more songs, the optimist Dreams single “A Sky Full of Stars” and the ten minute film Spheres closer to “Coloratura,” offering members of the public a chance to sneak away early if they “think our new stuff is crap.” It’s a handbag, but far from being rinsable.